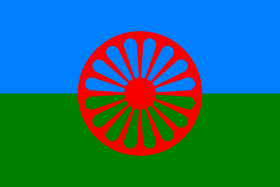 The first attestations of the Roma appear in Romanian documents dating back to 1385(Muntenia) and 1428 (Moldova) indicating them as goods of some monasteries. Roma were treated as slaves, because they had particular skills like metal-working, carpentry and entertaining. They were of great economic value. There were three categories of slaves: Crown (state), noblemen (boyars) and monasteries (of monasteries). The slaves of the Crown carried out three principal occupations: goldwasher, bear-trainer and spoon-maker. In addition, there were slaves known as “laiesi” who were allowed to move about the estates doing a variety of jobs, including those of musician, farrier, whitewasher, sieve-maker, blacksmith and coppersmith. Slaves of the monasteries were grooms, cooks and coachmen. Among the house slaves were scopiti, males castrated so as not to present a threat to the noblewoman whom they served.

Initially Roma were slaves of the State, but upon selling or donating them, they could become possessions of monasteries and the boyars.Field slaves lived in satras or collections of reed and mud huts on the outskirts of the estates, seldom visited by their owners. They were not allowed to have musical instruments for their own amusement, and they were bought and sold in lots, also called satras, cetas or salases. Groups of slaves remained under the supervision of a vatav (also called a ciocoi) or overseer, who was sometimes brutally cruel. House slaves were forbidden to speak romani, and their descendants, the Beyash (also Boyash or Bayash), today have a variety of Romanian, a Latin-based language, rather than Romani, as their mother tongue.
"For sale, a prime lot of Gypsy slaves, to be sold by auction at the Monastery of St.Elias, 8 May 1852, consisting of 18 men, 10 boys, 7 women and 3 girls: in fine condition." Wallachia. From Ian Hancock, The Pariah Syndrome, 1987.

The official documents used the word “rob” after 1600, but in general the word ‘tigan’ automatically means slave. They did not enjoy equal rights with the rest of the population, such as marriage. They could marry only with the consent of owners. If they were married without the consent of owners, the children would be separated from the parents and then, shared between owners. Only after 400 years, in the eighteenth century did the Roma have the right to marry without the consent of owners and the families could stay together. At that time, if a Romanian married a Roma, he/she would also become a slave. A “slave forgiven” became a Romanian or free man. Once released, he had the same rights as the Romanians. The onlyrightof a slavewasthe right to life. So the owner was obliged to provide food to keep them alive.But in one of the diaries of a French journalist who traveled in the Balkans, Felix Colson, says that, “although it frequently happens, not one boyar was on trial for murdering a gypsy in his possession.” Therefore even the right to life was often violated during that time.

Though the roma were slaves, they played an important role in the economy. An English traveler wrote at the beginning of the nineteenth century, “with all the gypsies make up a significant part of the community so they are viewed with the greatest disdain for other people, which, indeed, it carries with it a little more better than animals, and insulting epithet of ‘thief’ may be tolerated more easily than that of ‘gypsy’. ”

Roma were expert blacksmiths. Iron objects used in the Middle Ages were mostly made by Roma. Based on the relatively high prices that they were sold at, slaves demonstrated their economic value. They were the cheapest and most reliable source of work being readily available for the owner as well as an important source of enrichment for landowners and country. The importance of a boyar increased with the number of slaves he owned. Crown slaves were left in the middle to keep their nomadic lifestyle and practical craft, as long as they paid a fee to the state. However, the routes that slaves were allowed to travel were strictly controlled by the authorities. To keep control of them, several groups of Roma were placed by the state under the control of “bulibasa”,who would also be a Roma. It would happen many times that the Roma would go into hiding in the mountains to live free. They were described by a European observatory in the nineteenth century as “half wild, half-naked, eating dog meat by the absence of anything else”. Also Romanian politician and historian Mihail Kogalniceanu wrote, “On the streets of Iasi in my youth I saw human beings chained hand and foot, others with iron neck collars. Severe beatings and other punishments that starvation and binding over the fire [. ..] women separated from husbands and daughters of parents [...] sold like sheep ”

By the middle of the 19th Century, economic and social changes were beginning to affect the principalities. The efficiency resulting from mechanization introduced as a result the Industrial Revolution, both in America and in south-eastern Europe, was making the ownership, care and feeding of slaves a liability rather than an asset. Movements calling for Abolition in the West, brought into Romania by students returning from abroad, were a cause for self-examination. In 1855, the Moldavian Assembly voted unanimously to abolish slavery within the Principality. The Wallachian Assembly did likewise on February 8 the following year. Complete legal freedom came in 1864. Prince Ioan Cuza,ruler of the now-united principalities, restored the Roma to the estates they had worked on, not as slaves but as free people. It is estimated that the number of slaves was about 600,000 at this time.

This long period of Roma slavery left a visible mark on the majority of Roma communities. Roma slavery meant separation of their trades which contributed to Roma subgroups. But it has also proved their strength as people who survived more than 500 years of slavery, and managed to keep their language, traditions and identity as a nation.